It’s a contender, is Guillermo del Toro’s 50’s set ‘The Shape of Water’ – the type of magical vehicle where the director is the true star. Although I’d be disappointed if it won the golden man against ‘Three Billboards Outside Eugene Missouri’, this remarkable film would be in with a chance. It’s deserving of all the accolades it receives. As is Sally Hawkins, who puts in a brave and feisty performance as an aquatic man’s love interest. Most would give her no chance of the Oscar against Frances McDormand, but it wouldn’t surprise me if she causes a boil over. She already has a fine CV behind her (‘Maudie’, ‘Happy Go Lucky’, ‘Vera Drake’, ‘Made in Dagenham’ and let’s not forget the ‘Paddington’ series). This will only add to it. 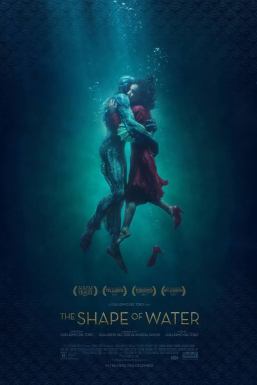 To Colonel Strickland (Michael Shannon, bringing his tightly strictured ‘Boardwalk Empire’ persona to the big screen) he is a monster, but to mute cleaner Eliza (Hawkins) he is something wondrous and compellingly attractive. She entices the Amazonian water creature into her orb with a boiled egg or two. Later she invites him into something else entirely, once she discovers his treatment by Strickland and his ultimate fate from the US military. She takes on the responsibility of being his saviour, assisted by her house mate, the gay and repressed Giles – a delightful performance by Richard Jenkins. She has her fellow custodian Zelda (Octavia Spencer stealing a few scenes) also by her side in this daring heist.

Del Toro, through his lenses, also gives an insight into how tough it was back then to be either gay or black. There is much loveliness here in this movie to savour – the Jenkins/Hawkins take on a Bill Bojangles classic routine, the dreamy dance between Eliza and Amphibian Man (Doug Jones) and the presentation of the sexual act between the unlikeliest of pairings. There is a funny explanation of the mechanics involved. The opening scenes to this offering are fantastic and the ending is stunning, but I must admit my mind did wander a tad around about half way. I also think the film would have been better without the naff inclusion of a Cold War spying scenario. But, really, this is a film not to be missed.

And shame on Age critic Jake Wilson for only awarding it a measly three stars. And really, Mr Wilson, do you actually truly think it can be an allegory for the relationship between a buffoon President and his icy First Lady?

Trailer for the Movie = https://www.youtube.com/watch?v=XFYWazblaUA