Dylan. Like all of us he’s getting on now. 79. The end is nearing – one way or another. But, for his Bobness, there never really will be an end, will there? He’ll just go on and on.

My first encounter with him would have been courtesy of my parents back in the early 60s. They were fans of Peter Paul and Mary and had a few of their LPs. Yes, LPs. ‘Blowing in the Wind’ and ‘The Times They Are a-Changin’ were on high rotation in my family household for a while. Of course, much later, I was to realise that the writer of those protest songs was Bob Dylan.

It was an album cover, though, that introduced him fully, leading on to his music. I’ve no idea what year that would have been as the memory is of the vaguest nature. It must have been well pre-uni. I was rifling through a stack of somebody’s records – whose I haven’t a clue – when one caught my eye. This was before said covers became an art form – they then usually merely portrayed the performer(s) grinning cheesily back at you. This one was different. It stood out, having a couple seemingly snugly hunkered up together against the elements, walking along a city street. There was a kombi in the background – very popular at the time.

‘What if Suze Rotolo had stayed home on July 29, 1961?’ This query and possible answer, written by Mark Ellen and an inclusion in a collection of pieces on the Minnesota folk singer – as he was back then just starting out, looking improbably young – my beautiful daughter gifted me a while ago. Thank you Katie. The answer to the question is that we probably wouldn’t have had Bob and all the wonderful music he’s gifted all of us. Suze was the young lady snuggled up to him on that cover. I assumed then that the first song listed on ‘The Freewheelin’ Bob Dylan’ would have caught my eye – was it the tune I recognised from one of Mum and Dad’s albums? Methinks I would have then asked my host if he/she would give it a whirl on the gramophone to see. ‘My,’ I would have presumably ruminated, ‘that ain’t like how P, P and M did it at all.’ The voice, with its rasp and sneer, was like nothing I’d heard before, but, along with so many others, I just knew it had something. It undeniably had something. Perhaps even I might of thought he could be a new voice for my generation. It sounded as though he really meant it, being his songs were without the usual syrupy accompaniment you got back in the day. It was so raw. Many would say now that the album’s collection of protest was Dylan’s first hoax. 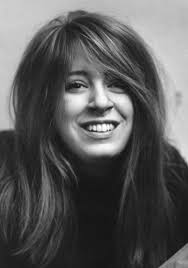 Rotolo is no longer with us, succumbing to cancer in 2011. But, aged just 18 when she made the trip to be in the audience that day for a radio broadcast at Manhattan’s Riverside Church, billed as ‘An Afternoon of Folk Music’, she was as far left as it was possible to be. Her parents were avowed communists, very supportive of a Russian spy they knew. She was already a member of CORE. Dylan was apolitical at the time, but Suze changed all that. Roger McGuinn, another habitué of Greenwich Village at the time, reckons the folkster only penned his anti-war songs to impress Suze. You see, he was smitten and remained so during an on again, off again relationship, lasting through till ‘64. So Dylan’s entry into famedom was largely down to her – and ‘Don’t Think Twice, It’s All Right’ is regarded, by those in the know, as a kiss-off song preceding the final break-up. ‘Freewheelin’ included two other tunes that have stood the test of time in ‘A Hard Rain’s Gonna Fall’ and ‘Masters of War’.

Soon I too was buying his albums as they came out. I can’t remember if the one that first attracted my attention was in my collection or not. If it was, I have no idea where it is now as, once upon a time, vinyl was out of fashion. Who’d have thought! I adored ‘Nashville Skyline’ (1969) and ‘Self Portrait’ (1970) back in my uni days.

Will I buy ‘Rough and Rowdy Ways’? I don’t automatically purchase these days so I’ll have a listen on YouTube or Spotify. So we’ll see.

We do owe thanks to Suze Rotolo, I guess – and then to your Bobness for giving the universe so many anthems of a generation. His crotchety, scratchy greatness will never be dimmed, even by his eventual ‘Knockin’ on Heaven’s Door’.