She stares blankly back at the camera, her upper torso fully exposed to the lens. It wasn’t so much her that caught my attention, but the caption beneath, on a Tumblr vintage photography site – ‘The Roman Beauty, Vienna, Austria 1944’. Nazi controlled Vienna! That led me, briefly, to dig into the attitude of the Germans to nudity during the Hitler years and I supposed I shouldn’t have been too surprised to find it was fairly liberal, given the work of Leni Riefenstahl. I discovered that a book of nudes was a best seller during the period, it blatantly espousing the physical mastery of the Aryan race.

My attention then turned to the image’s photographer and I discovered a very interesting fellow, Herbert List. He, it turns out, was very focused on photographing his own gender in the altogether – so this young lady was somewhat of an anomaly. The thought did cross my mind that she may have been not quite what she seemed gender-wise, but I knew that’d be a dead-end street for delving. So, what was a gay photographer, who also happened to be a Jew, snapping a photograph of a topless young woman in 1944? I found out quite a bit about the outward man, but zilch about the inner workings. Still, half a story is better than nothing at all.

List was born with a silver spoon in his mouth, not that that counted for much once the Nazis came along – or did it? His family were resident in Hamburg and involved in the coffee trade. For a while this was also Herbert’s vocation, travelling the world, dealing in the lucrative product. During the years of the Weimar Republic he was, as a hobby, recording all of his adventures with a camera. He didn’t take it too seriously until he became caught up in the prolific art scene that was flourishing in his country at the time. He observed that, by now, what he thought of as a mere pastime, was indeed becoming an art form and he decided to push his involvement to the next level. He purchased a Rolleiflex. He played around with it for a while, experimenting on family and friends. But by the 30s he was hooked. Following his proclivities he was now paying male models to pose for him. Also, influenced by the Bauhaus movement, he tried transforming everyday objects into photographic beauty with double exposures and other techniques. 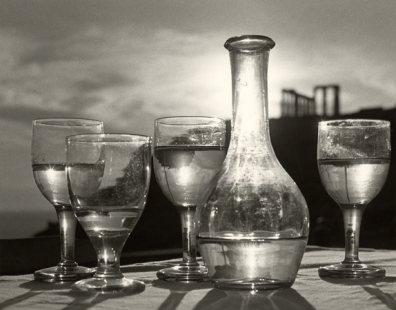 Hitler came to power and List saw that his country was soon to become no place for a Jewish gay man. So he high-tailed it out of there and took his camera to the capitals of Western Europe, his hobby now his calling card. A fellow camerasmith submitted his work to Harpers Bazaar and they took him on board for fashion shoots. But posing the female model irked him so, in 1937, he took off to the temples and landscapes of Greece. As well he landed his first solo exhibition in Paris that same year. ‘Life’ also started to feature his projects. He was getting traction on a real career in the field.

In 1941 the Axis powers invaded Greece, caught List up in their net and returned him to the Fatherland. Being a Jew he was forbidden to carry out his profession, so he took it underground. He was still permitted, though, to travel throughout occupied Europe. HL even rubbed shoulders with Cocteau and Picasso in Paris. For a while he was seconded into the army, working in Norway as a map designer. And in 1944 he was in Vienna, producing a series of images of its famous waxworks. In that city he took the likeness of that mysterious model.

So, all in all, considering the fate that could have awaited him, he had a fairly cushy war, or so it seems. After VE Day, he got back down to business with his camera. Much of his secret trove during the war years had been lost, but he didn’t waste time dwelling on that. He was soon being employed chronicling the destruction of the cityscapes of Germany and was editing the art section of a popular magazine. He became involved with Magnum, for a short while, after meeting Capra, but any notion of ongoing association with them vanished once he came under the influence of the great Cartier-Bresson. He emulated, successfully, his techniques, receiving substantial work opportunities as a result. He travelled extensively, publishing books on various locales, especially the Italian peninsula and on Africa.

However, once the swinging 60s hit, young guns were now in vogue and Herbert’s take on the world began to be regarded as old hat. He figured he was too set in his ways to change, so he retired from pointing the lens. By the time he passed in 1975 he had been largely forgotten. But I discovered him through a girl with vacant, but brazen, stare. She, no doubt, had a story too – but I had to make do with only half of his.