Summer is supposedly the time for effortless reads in the sun, so perhaps it was somewhat perverse of me to tackle two of Alex Miller’s tomes at this time of year – his mint new offering ‘The Passage of Love’ and one that had been hanging around on my shelves for a while, ‘Autumn Laing’ (2011). Miller is one of my favourites, up there with Winton. He is also a national literary treasure and I think ‘Journey into Stone Country’ and ‘Coal Creek’ are masterpieces. He won the Miles Franklin for the first title, as well as for ‘Ancestor Game’.

As it turned out, ‘The Passage of Love’ was a breeze, a real effortless read of 500 plus pages that I loved returning to and got through in a flash. ‘Autumn Laing’ was a different matter.

The question to be asked is how much of Robert Croft, the first book’s central character, is Alex Miller? From what I’ve perused, in terms of reviews, the author has conceded they are largely the same person, but not quite. So the offering is quasi-autobiographical I guess. There is some playing around of the time scale that Miller has admitted to. It covers a thirteen year period during Croft’s life – his journey from the UK to jackarooing in the outback to his city factory work, a marriage and trying to make it as a writer. Miller’s first wife Ann was a troubled soul as was Lena, Croft’s wife, who was bookended by two other women in ‘The Passage of Love’. Firstly, in Melbourne, there was Wendy, an older bed partner who had no time for love but plenty for sex with a sex-starved young fellow. After the anorexic Lena, at the end there came the person who was to be his rock, career wise and emotionally – Ann. Overriding these relationships was the one that drives him on in his obsession to be a writer of note, his friendship, during his formative years on a cattle station, with an Aboriginal stock-man.

Much of what happened in Croft’s life is a mirror image of Miller’s, including the close encounter with suicide and a rejection letter that cut both to the quick. How can writing be both very fine but unpublishable?

I keep very few books after I’ve read them, usually passing them on to friends or family; either that or donating them to the local community library. I ripped through ‘The Passage of Love’ in lightning time for me – and it’s definitely a keeper.

But ‘Autumn Laing’ – oh dear, was that a struggle. Till well over the half way mark I wasn’t enjoying it one little bit. But then something kicked in, I was away and started to actually relish it. But it took most of the month to get to that stage. 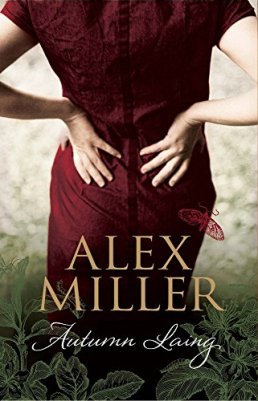 And it also took a while to twig that this was Miller’s version of the artistic machinations of the Heide story, with his major characters being based on Sunday Reed, her husband and the artist Sidney Nolan. Taking place during one of the golden periods for Australian art, it’s a tale that has fascinated me for years. And, in a link to ‘The Passage of Love’, it was a book of outback images, taken by the great artist unbeknown to Miller, that first enticed the writer to come to Australia.

Autumn (read Reed) is in her dotage, her body increasingly failing her, obsessed by her memories and memoirs, she recalls her affair with the mercurial Pat Donlan (Nolan). At that time the would-be artist was trying to convince himself and the world around him that it was possible to paint in an Australian way. He finds he is bashing his head against a brick wall in conservative Melbourne until it is recommended that he visits a supporter of young talent from outside the art establishment – Arthur Laing (John Reed). Through a series of events Pat eventually moves into the Laing’s residence and commences his affair with the only too willing Autumn. The pair soon take off to the back country of Queensland where Nolan, sorry Donlan, finds his mojo and his art supplants his lover. Both Pat and Mrs Laing are not particularly appealing characters – I was more drawn to the ever-patient Arthur who was prepared to wait out his wife’s infidelity until the artist leaves them both for fame and fortune.

I’m pleased I read ‘The Passage of Love’ first. Had I commenced with the older book the latest may still be sitting on my shelf this time next year. ‘Autumn Laing’ is not a keeper, but I am hoping the eighty year old Miller can continue his semi-autobiography with a sequel, as well as delivering other titles. Long may Alex Miller be around.