Sometimes, down a rabbit hole, cruising the Net, you do stumble on stuff you least expect, given your starting point. When I saw the llama, who’d have thought it would lead me all the way to Marilyn? And also to a great love story – not hers, but she’s a part of it.

I hadn’t stumbled across it before, the image. It’s not unusual for me to find a commencement point for a scribbling with an image. Evidently this one, though, is quite iconic in its own right, but it was new to me and caused me to chortle when I saw her. I thought that some contemporary camera-snapper had struck it lucky, but on closer inspection I discovered it had been taken way back in 1957. I didn’t recognise the photographer’s name. Perhaps I should have, for she has since achieved some degree of fame. And it wasn’t a fortunate snap. Inge Morath had set it up as part of her assignment for ‘Life’ magazine.

Seems as though, back then (I can’t imagine that it would be allowed to happen today), there was a whole menage of exotic animals living in the brownstones of NYC. Biggish mammals, like Linda the Llama, were co-inhabiting New York apartments with their trainers. Together they would eke out a living hiring out the trained beasts to movies and television shows. Of course they had to be transported to the various sets around town. Linda’s human did that in the rear seat of his car, with her head poking out the window, taking in the view. ‘Life’ honchos had cottoned on that this unusual arrangement was occurring in the Big Apple; these animals with unusual lifestyles. They commissioned Magnum member Inge Morath to put together a photographic essay of their days in an urban environment. Thus this image caught my eye down the rabbit hole. The story does get juicier, but let’s spend some time with Inge first. How did she come from an Austrian upbringing to be standing in Times Square, with a camera, waiting for a llama?

Born in Graz in 1921, Morath moved to Berlin to study languages, becoming fluent in French and English. That ensured some of her early years were dominated by the Nazis. She saw many horrors that influenced so much she did in later life, being reflected in her product – both with pen and camera. In the immediate post-war years she encountered Ernst Haas, noted fellow countryperson, who was earning a crust with his photojournalism. He, too, as a Jew, suffered under Hitler’s regime. He used the young woman to write the essay accompaniment to his commissioned images. That in turn led to contact with Robert Capa and an invitation to join Magnum, in Paris, as an editor. One of her roles there was to assist Henri Cartier-Bresson as a researcher; he mentoring her growing fascination with the camera. Her writing, she felt, was being hampered by reactions to her German-speaking background. Behind the lens she felt no such hindrance. Initially she used a man’s name to market her product, assisted by the connections she had built up working with a stable of talented camera pointers. Eventually she gained enough confidence to stand up for her gender and market under her own name. So successful was she that, in 1955, she was handed the holy grail – full membership of Magnum. She was one of its first female image-makers. She continued to be in demand, particularly for the photo essay with which she excelled.

All this I found out because of my encounter with Linda the llama. But what came later for this pioneering photographer? A visit to her on-line site allowed me into her world and its many delights. It was liberally laced with haunting images of both Audrey H and Marilyn M. I marvelled at their intimacy. I was especially taken with one of the irreplaceable MM in bed. Further investigation as to its genesis took me to the set of ‘The Misfits’, a film, made in 1960, that promised so much but delivered seemingly only sadness. As well as the blonde superstar, Clark Gable, Eli Wallach and her mate, Montgomery Clift featured on the cast list. Little were the participants aware that it would be the last movie for two of the aforementioned. Clift, Marilyn’s buddy as well, was never the same after it. Marilyn described him as being in worse shape on set than she was – and she was struggling; handicapped by depression and filling her body with chemicals to cope.

But she was still radiant. Morath describes her as being ‘…marvellous to look at: there was a shimmery, mother-of-pearl quality totally her own…’ Her friendship with with Clift and director John Houston gave her and Cartier-Bresson unfettered freedom on set – but Inge took that to the limit. She soon had Marilyn’s trust, thus the up close and personal snaps we see on-line. Also on set was the great Arthur Miller, writer of the screenplay for the production. Inge thought that the famous playwright would be, on the evidence of a number of his plays that she’d seen, forlorn, distant and austere. She found that he was more the opposite – ‘… a very funny figure.’ Marilyn, of course, was also married to him, but all was far from rosy with their love life. She would disappear for hours to have deep and meaningfuls with him. Inge photographed them doing so in a car on one occasion. The situation could not have been more fraught with Ms Monroe playing a seductive innocent, expected to engage in love scenes with several of her fellow actors.

Rebecca Miller, Arthur’s daughter (and wife of Daniel Day Lewis), commented in an interview that Inge’s ‘…pictures are particularly empathetic and touching as she caught Marilyn’s anguish beneath her celebrity, the pain as well as the joy in her life.’

But was there even more going on behind the scenes on ‘The Misfits’? Did the images tell the whole story? It has to be asked for in 1962 Inge Morath married Arthur Miller, not long after he and MM divorced. She, Marilyn, died a few months later. Morath and Miller were together for, from what we can gather, forty largely happy years. She passed in 2002, he three years later. They had two children together, Rebecca and the mysterious Daniel. He had Down syndrome and Miller disowned the little fellow almost immediately, having nothing to do with him for the rest of his life. This placed a strain on the couple as Inge did her best for him. But that is another tale in itself. Apart form that, in their years together the couple had many adventures, either together or as a result of their separate talents. 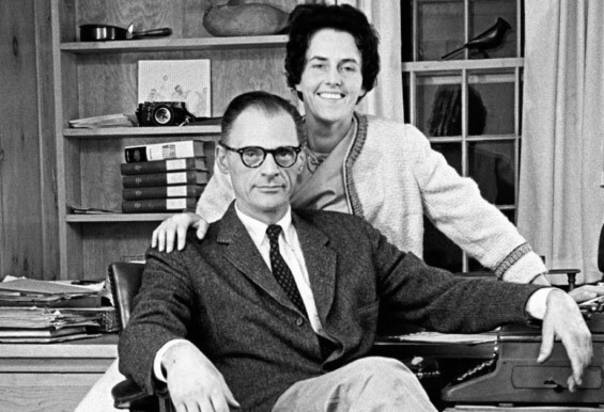 And Linda led me to all that. Many know Arthur M mainly through Marilyn and certainly nobody could possibly outshine her – back then, even today. Inge was not her and so remains largely in the shadows, but hers is a story worth recounting. From her escape from the Nazis and her dalliances with the stars, she has been accorded a smattering of legendary status as her star ascends in recent times. Just track down the lovely YouTube montage (just enter the two names) of her breathtaking images of the screen goddess on the set of ‘The Misfits’ and you can see why. Thank you Linda, the llama that led to all this.

YouTube of Inge’s images of MM on ‘The Misfits’ set = https://www.youtube.com/watch?v=GG4uRQwIPuE