Nailed it Shane. Yep, I’m one of them – one of the ‘Three Days Off in the Week’ mob. And I’m probably about to bore you too. But Shane, at least I can say I never, ever, even long ago, exited’…a club at 4am with blurred face and champagned hair…’

Dear lady columnist, I could have boasted I’d never been drunk this century. But now, dear me! Not any more. I happened to be alone, apart from Sandy the Spoodle, doing a little house sitting at my brother/sister-in-law’s Sisters Beach abode. It had been a tough week – such a tough week for a variety of reasons.

Now last century, those days of yore and cask, I’ll admit, I was a fairly uninhibited drinker. Rarely inebriated, but certainly gently buzzed and after all, my good doctor did preach two glasses of red with every evening meal and who was I to go against medical advice. Then, after tea, I had to lubricate my way through endless hours of lesson prep and mind-numbing marking. I, of course, rarely stopped at two. But then, I knew when I’d had enough well before the gentle buzz approached chain-saw level. Then a beautiful lady entered my life and sweetly eased me down a further notch or two. I loved her to bits – still do – and became a three nights completely off man.

Whisky, beer, wine of any colour – I adore the stuff. But now I’m regimented – my quota and no more. Discipline is my mantra in the 2000s – that is, until…. I blame you, Rich and Shan. I do!

That time, on a Sisters Beach couch, as dusk turned into night over the hills, the big screen tele was showing the footy. A few wines to accompany that, that’d be the go to wind down after a somewhat fraught period of time. My dear brother had left a tempting white in the fridge and in his sideboard I found a reminder of one of the happiest events in my life, the wedding of my Rich to his Shan. There, amidst numerous other flutes and steins, were the shapely etched goblets the bride and groom gifted their attendees at that glorious Bridport occasion as a memento of their enduring love. Note I said goblets. Note also that, of an evening, my usual amount is two glasses of wine and a stubbie of beer. Well folks, I didn’t make it to the beer. My brain should have informed me that a goblet would hold much more liquid than one specifically designed for wine, but my brain wasn’t in the finest of fettle at the end of that week. To top it off the AFL game that night was riveting, although I was alert enough to know that I felt somewhat unsteady as I made my way to the fridge, at half time, to top up. I put that down to rising up from my supine position on said settee too quickly. Never dawned on me I was already half-cut – about to become fully-cut.

By the time the three-quarter interval came around, I am totally ashamed to say, I was drunk; thoroughly inebriated; totally rat-arsed. The television was swimming before my eyes. Time for bed. The only question was how to get there as I was wholly legless and befuddled. I have no recollection at all now of how I managed that feat – but the next morning I awoke in it. I suspect some serious cross-country crawling was involved.

But, dear reader, the realisation that I was completely crapulated – yes it is a word – by booze was/is a horrible feeling. Horrible. When I lifted the offending bottle for inspection the next day I found only the merest finger of liquid in the bottom. There was, surprisingly, no symptoms of a hang-over. But, nonetheless, it is an experience I am in no hurry to repeat. These days I take my alcohol in moderation and I didn’t need a hang-over to remind me of how crook I was when it hazily dawned on me that I had over-indulged. 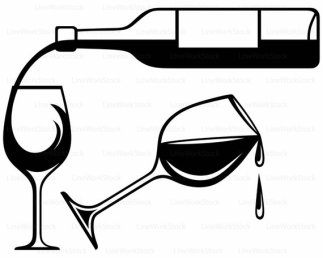 But it’s a salve blaming the wedding glasses.