Watch him on YouTube. Maybe, if you’re my vintage, you’ll remember him, but the clips on the digital carrier of the player in his pomp are still eye-opening – as they would be to younger souls who never witnessed him play. Of course modern football, with its fast and furious gut running, is a very different kettle of fish to when he was up and about but, no matter your age, can you see the similarity? Can you see the magic he weaved? Do you reckon, like I do, that he also had that same special x-factor as the guy we said goodbye to this past week?

Dusty breaks up packs with pure strength, escaping them, ball in hand, with don’t argues. Selwood burrows in with head down cunning. But the Doc wove his way through and even if he didn’t have ball in hand, he was still in control of it. And that’s the case with Cyril.

Darrel Baldock’s glory years in the VFL were back in the sixties, but he was a star even before he crossed to Yarra City. I have a very early memory of my father pointing him out to me before he left and telling me what a champion he was. Tasmanians had champions back then, some even seeing no necessity to leave the island. But the Doc did and all we islanders know what happened when he donned a St Kilda guernsey. I only fully remember him when he came back to the North West to captain/coach Latrobe in the local comp, the NWFU. Back then Tasmanian footy was vibrant and watched by thousands, continuously producing those champions who found Melbourne fame. It was a far cry to the pitiful state of the local product today, thanks to the behemoth that is the AFL, the digital age and maladministration. By his return the champ had lost most of his magic and at times his focus wasn’t always on the ball, but he was still miles above any opponent placed on him.

I wrote recently how I’m drifting away from AFL as a viewer of copious hours of it on tele. Sure, we’ve still got Buddy and Eddie for a while longer, but the loss of Cyril doesn’t help. As Tim Boyle wrote in a tribute piece for the Age, ‘Now it will be harder to laugh at the footy.’ for the player was pure entertainment. He dazzled, leaving others at the height of their powers looking stupid in his wake. And boy, could he get up in the air for a hanger.

I loved the way Bob Murphy, who also penned a piece in homage, commented as a recent player that, when he had the ball against the Hawks and scanned the way forward, if he couldn’t see Rioli, he knew he was in trouble. 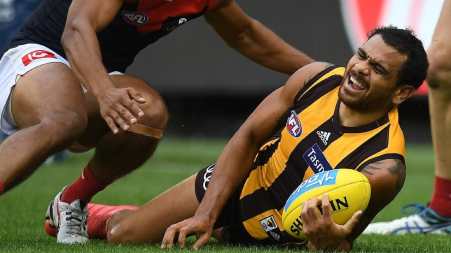 Today’s game needs the magic that Cyril can produce as so much of it, unlike in Baldock’s era, is waged in close. I have wondered how the Tasmanian would have coped with today’s style of play. Certainly he couldn’t have held down a key position as he did for the Saints, but I’ve no doubt he would have found a way. He, like Cyril, was a pack weaver. The Hawthorn player could transform a game with only a few stats against his name, as he did in one of the four grand finals he played in. On this day the crowd, crammed into the ‘G, was in no doubt who the judges should award the Norm Smith to for best afield. The chant went up and they had no choice. It could only be one man. 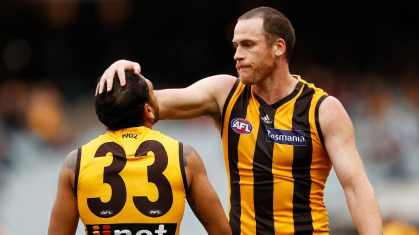 He’s struggled these last two seasons in body and mind, especially in the latter which has been in another place. I’m probably too old to see another pack weaver of his or the Doc’s quality in my lifetime, but their deeds will live on, thanks to the digital world. Many scribes are expecting that one day in the not too distant future Cyril will return, but in some ways that will be a tad sad too. As his body slows down guile will come to the forefront, replacing the dazzle and magic. It wouldn’t be the same. Let’s remember him as one who left us breathless – you wouldn’t want him coming back to the pack.