Nobody does pomp, pageantry and upstairs/downstairs on the screen, big and small, better than the Brits. And with such a long and rich history, they have plenty to work with. And nobody strode the stage of Twentieth Century history like Winston Churchill. From the Boer War till his death in 1965 he was a formidable figure – the man who saved his country from Nazi domination. But it was his overseeing of the Gallipoli campaign, in the previous war, that left the indelible mark on his psyche (and ours), causing his life long battle against another tough opponent, the black dog – but more of this later.

The great man also left his imprint on the greatest human mass migration of his times with the Partition of India, the setting for the first film I viewed from the years of WC’s pomp, even if he was having a hiatus at the time between prime ministerships.

As for upstairs/downstairs, ‘Downton’ set the bar pretty high, but transfer it to India as the events unfolded on the sub-continent and we have the same great divide in ‘The Viceroy’s House’.

We pick up the story as the momentous climax to this episode of history approaches. Lord Mountbatten, the last viceroy, has just arrived to oversee independence. All the major players are present – his Lady (Gillian Anderson), Nehru, Gandhi and Jinnah. Substitute the viceroy’s palatial abode for ‘Downton Abbey’, add in some star-crossed lovers from two religious backgrounds – both from the downstairs – with political machinations in the state rooms, then we have all the ingredients for a show approaching the calibre of the television behemoth. And there’s another connection. Hugh Bonneville plays, with aplomb, Lord Louis.

By far and away what went on upstairs is the interesting bit, more so than the soon to be doomed (isn’t it obvious) romance going on in the bowels. The two hirelings are torn apart as events, from 1947, gather momentum. We don’t directly see the inhuman consequences and mass slaughter that went on, but what Churchill secretly set in place for India has diabolical results on the ground. 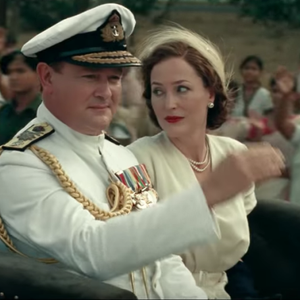 For many critics Anderson stole the show, but the ‘Downton’ veteran is as serviceable as ever. Michael Gambon also has a presence, surrounded by an array of other familiar faces of Brit thespians and their not so familiar local counterparts. It’s an intriguing yarn. It’s not ‘Downton’, but nonetheless is terrific value for the ticket price. And if, after viewing it, you would think the conclusion a tad fanciful and Hollywood, just wait for the end credits featuring the director Gurinder Chadha’s own story. You might just think again.

And now to the great man himself. In ‘Churchill’ it is the spouse (Natasha Richardson’s Clemmie) who, yet again, is the gel that holds her man together. Brian Cox makes a fine Winston, up there with John Lithgow’s performance in ‘The Crown’. James Purefoy, as King George VI, also catches the eye. I also enjoyed Mad Men’s John Slattery as Eisenhower, seemingly more at home in this role than he was in ‘Spotlight’. 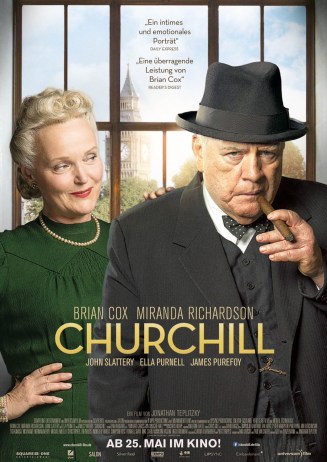 Churchill has the war-time blues big time as the D-Day landings approach. He has flash backs to the time he ordered another sea-borne assault on enemy territory and is not being helpful in the planning of this new event. Montgomery and co aren’t happy with him as he descends into a funk. No one can snap him out of it – not Clementine nor his constant companion, South African PM Jan Smuts. Assistance here comes from an unlikely source.

Battle lines again were drawn up in the UK as the film bent facts to make a more engrossing tale. Many railed against its inaccuracies. We know WC did indeed suffer mightily from the dog and had doubts about sending all those young men into the teeth of Nazi machine guns on various Normandy beaches. The ingredients were definitely there, so does it matter if history is massaged a little into the unlikely and strictly untrue? It’s an entertainment after all. And ‘Churchill’ does mightily entertain, even if it didn’t create the same waves as ‘Dunkirk’. I was engrossed.

Trailer for ‘The Viceroy’s House’ = https://www.youtube.com/watch?v=id_ZyNdvXKQ