I didn’t get Frank Zappa when I was at uni and he was all the vogue – but then I didn’t get a lot of the stuff that was going down back then. Some of my mates were into him big time though. To my ear his music was discordant, his lyrics obviously the result of an acid trip or such like. Maybe, if I listened to him these days, I’d have a different take for there’s someone I now like immensely who’s been likened to him. He’s described by one critic as ‘…the Frank Zappa of American literature.’ That someone is TC Boyle – the C being for Coraghessan – now that’s a name worthy of FZ. No, I prefer another critic’s description of this vibrant US wordsmith, one more to my own disposition in that he is a writer of ‘…caffeinated energy.’ And that is what attracted me to him in the first place – that and his command of rare and wonderful words.

For ‘The Harder They Come’ and ‘Terranauts’, though, he has toned his language down and for this reader both these recent outings suffered as a consequence. Maybe his eccentricity with our language just wasn’t doing it for him anymore in terms of sales – he needed product aimed at the mainstream. Still, both books, particularly the long, but always engrossing, ‘Terranauts’, certainly cut the mustard. The literary pyrotechnics may have diminished – but old TC can still relate a rattlingly good yarn.

I’d meet them occasionally during my teaching career – perfectly normal, pleasant and capable parents who, in an ideal world, would produce mirrors of themselves in their children – except they didn’t. Sometimes it may have been only one bad egg in a few, sometimes, perhaps even more troubling, the bad egg may have been an only child. And we’re not talking anything remotely like autism here (never bad eggs), we’re talking genuinely unpleasant souls – born criminals if you like. From an early age, if somebody or something couldn’t straighten them out, they’d end up in the clink. Of course mum and dad would be at their wits’ end and often I, or the school, would have no solution. They were just wired that way. So I felt for Sten and Carolee in ‘The Harder They Fall’ with their son Adam. He seemed rotten to the core.

Michiko Kakutani of the New York Times likens this novel to an award winning television series I particularly care for, ‘The Affair’ (can’t wait to pick up S3 just released), in the book’s structuring as TC presents the story from several perspectives, meaning it all doesn’t quite add up. 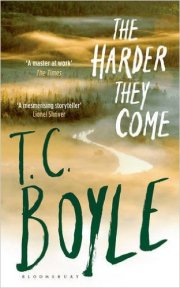 Sten himself is a bit of an all-American hero. The Vietnam vet was on a shore excursion from a Caribbean cruise when his party was attacked by a bunch of wastrels in the Costa Rican jungle. Sten Stensen almost accidentally kills one of them, thwarting their evil intentions – and he gets his fifteen minutes of fame when he becomes an overnight sensation. But, as much as he may want to, Sten cannot sink back into total obscurity as his son, with whom he cannot relate to one iota, goes on a rampage. Soon every sheriff in the county is after him, even his dad. We all know where this is headed, don’t we? But TC Boyle cuts us off at the pass.

Some time is devoted to the seemingly implausible relationship Adam (or, as he prefers to be called, Colter – and that’s a whole other tale) has with the older Sara. This lady, in her own way, is a bit of a fruit loop too. But, for me, their misshapen attraction for each other is the real nub of the novel, rather than the father/son disengagement that Sten wants to put an end to once and for all.

The title of the book comes from a DH Lawrence quote that opens TCB’s saga. ‘The essential American soul is hard, isolate, stoic, and a killer. It has never yet melted.’ And I suppose that well may be as true today as when the great literary figure scribed those words. ‘The Harder They Come’ sees T Coraghessan B manfully ruminate on that notion.

You’ve no doubt read about humans practising to colonise another planet by recreating their environments here on Earth. ‘The Terranauts’ is a riff on that, actually based on real events late last century in Arizona. But the ability to survive in these situations largely requires us to co-exist with each other as much as what a hostile artificial mother nature can throw at us. Can we do it? That is the first step in the process and is what the author investigates in this offering. 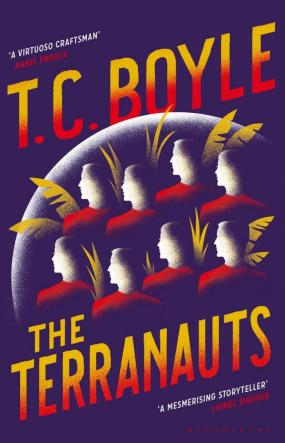 Boyle’s heavy tome tells of the Ecosphere 2 – the first, ES1, having given a decidedly negative answer to the above question. Eight brave, or foolhardy, souls will venture into a microcosm of our planet’s various habitats to see how they fare, almost completely cut off from the outside world. It’s all related to us through the eyes of two terranauts and one would be one. Linda Ryu was unsuccessful in her application to enter ES2, but is hopeful of a guernsey for ES3. There’s attractive, buoyant and perhaps somewhat naive Dawn Chapman, as well as her eventual love interest, Ramsey Roothorpe, a great name for a really sleazy root-rat, who are on the inside. This is Summer Bay transferred to a situation where food, sex and dealing with adversity are everyday considerations.

Ramsey seems set to work his way through all the female characters, inside and out, before he comes to dead stop with Dawn. What happens between them threatens to send ES2 down the same ignominious path as its predecessor. Can strength of character prevail to keep the operation afloat? The answer lies with Ms Chapman as she nears a shattering decision.

TCB has great fun with this scenario, taking his readers along for an enjoyable romp with him. It’s lengthy (for me), but he never loses traction en route. Why anyone would put themselves through what the terranauts do is beyond me – perhaps some are really, unlike Sten, intent on their fifteen minutes. And as a chronicler of US life and mores over the last hundred or so years, even if in Zappaesque fashion, I reckon TC has earnt his too.