I found her as I was ambling around an Australian art site on one of my journeys into the ether. She has to be related, doesn’t she? Just hang on a sec while I check out her bio….Yep, she is.

I’ve come out to a few who know me well, but now it’s time to come out to everybody. Yes, I’m one of those throwbacks. I’m owning up to it. I’m a philatelist; a stamp collector. Many would find that sad and shake their heads in derision – that’s why I keep a low profile about it. But I relish my affliction. It’s been in my DNA ever since I was was old enough to first hold my mother’s precious album in my little hands. I was enthralled way back then in the fifties – and now still am. At times, especially in my uni years, I tried to disown it as I perceived it to be a totally uncool diversion, but I soon gave up. I realised I was hooked for life. I’m not sure about making it public but beautiful daughter, I think, has a bit of the bug too and I have great hopes for my granddaughter, the amazing Tessa Tiger. My lovely Leigh’s grandson, Brynner, seems fascinated too. I love buying stamps for them – as they are released from AusPost or from the knowledgeable, affable David at Hobart’s Coin and Stamp Place (110 Collins St).

It will mean much to have someone enthusiastic to pass all those folders of stamps on to. 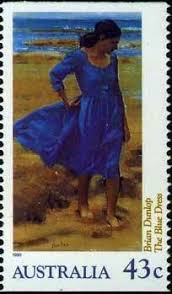 Now if someone ever asked me what my favourite ever single issue of a stamp was I’d have no hesitation in saying the ‘The Blue Dress’ release of 1990. For some years I used its depiction of a painting featuring a young lady on a beach as a teaching tool with my creative writing students. A large poster of it graced my teaching room. My inspiration for that came in 1991 when prominent author Libby Hathorn edited a collection of stories from some of our country’s leading YA writers – Brian Caswell, Gary Crew, Sophie Masson etc. She asked them to commit to print their take on the girl on the stamp. I used a couple of the stories to motivate my classes before asking them, ‘Who is she, do you think? Tell me about her. What’s her story?’

Turns out writer Libby had more than just an inking about the girl in the picture. It was her own daughter, Lisa, posing for it. The fact that she was on a beach to do so was another selling point for me.

Of course back then I was keen to find out more about the creator of the delightful image. I discovered that the prominent artist of the piece at times hated his job. His love was working on figurative studies of ‘The Blue Dress’ kind, but to fund this he received commissions for portraits, becoming so competent he was even asked to paint the Queen. He turned in quite a beautiful and unusual completed product for this, easily found on-line. His sumptuous figures, mostly gorgeously robed but occasionally nude; sometimes in a home setting, sometimes in the great outdoors, are all quite luminous. His work is instantly recognisable. He was popular with art-lovers from almost the time he took up a brush and had a long career, culminating with his death in 2009.

So when I encountered Sophie Dunlop in my wanderings, I did wonder if she was akin to the great Brian – but you already know the answer to that. She was one of his two daughters. 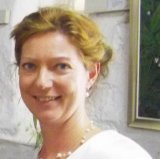 Although Sophie cites her father as one of the great influences on her own artistic endeavours, the Adelaide dauber has chosen not to follow in his figurative footsteps. Still life is the road she travels, having achieved a great deal of success with it as you too may discern if you check her work out on her site. ‘It’s the beauty I see in fruit, the flowers of my local marketplace and in nature that inspire me. I am attracted to distant lands and the exotic. I relish the intricate details and the uniqueness of the subjects I paint.’ I was almost as drawn to her oeuvre as I am to her father’s.

So finding her on-line drew me back to Brian Dunlop as well and that special stamp. I know fully well my darling daughter and the extraordinary Tessa will treasure my collections too when the time comes. It’s a part of me that I’ll be passing on.