‘A New England Affair’, ‘Spirit of Progress’, ‘The Year of the Beast’ – Steven Carroll

Never in my wildest dreams would I claim to be capable of wordsmithery to the finely honed marvel of literary excellence that Steven Carroll presents to the Australian reading public, doing so for several decades now. His ‘Glenroy’ series; his novels revolving around TS Eliot have been a mainstay in my own book perusing life for quite a while, with one of the above titles inspiring a little scribing of my own. ‘A New England Affair’ tells part of the history of the aforementioned poet’s both restrained yet tumultuous private life – that of his longstanding and unconsummated relationship with fellow American Emily Hale. In it we encounter both his wives as well – the first being Vivienne Haigh Wood. Marrying her in haste was largely the best way he could see to dispose of his virginity. His second spouse, Valerie, wedded him in his later life. She finally gave him some private bliss and sexual satisfaction. She was only touched on in the novel, but I was fascinated that Valerie was around forty years his junior. What was her motivation in marrying such an ageing beau – was she a gold digger for fame by association and/or financial security, or was there genuine love in the mix? I turned to the ether to find out more and discovered it seems to have been the latter. I was able to flesh her out a tad more and produced a blog piece, entitled ‘Gap’, as a result. This revolved around her life with perhaps the greatest poet of last century, mixed in with a tale of a retired teacher and a salesperson from Kaboodle. If you’re so inclined, please do read it – but it does contain prose that is a little spicy.

In ‘A New England Affair’ we encounter Miss Hale, at age 74, when she has retreated into her inner person, the outcome of her final rejection years before by Tom Eliot. She is making a journey of significance by ketch out to the Dry Salvages, a notorious rock formation off her country’s North East coast. It is of importance to her because of a halcyon period she spent with her man of letters back in the day in the area. She takes this journey with an ageing seafarer at the helm; a journey to dispose of memories; a journey fraught with danger as there’s a storm a-brewing. Over the course of making the crossing she casts her mind back to those days when she had hopes, as well as to those when she had none; to when her dream was shattered. There were two moments when she could have possibly had what she wanted, so she reappraises those and what might have been. The problem was that their sameness got in the way. Both were socially withdrawn – unable to adequately communicate their real feelings. Eliot was hampered by his faith and of course, later on, by a wife he had little affection for, but much guilt because of. He did go on to find Valerie; Hale went on to shrivel.

More cerebral reviewers than I have pointed to allusions in the book to verses in his poetry, as well as to the works of Henry James and Jane Austen. I can’t claim to be nearly that savvy. It was the waste of almost, but not quite, two lives that got to me. One was renewed by a less corseted younger woman, with that taking me to another place.

Another of Carroll’s tomes had been sitting on my shelves for some time – it was, in fact, one of the six works of fiction from his examination of the Yarra City suburb of ‘Glenroy’. With supposedly the final offering of those being released in early ‘19, I decided I’d better tackle this one too.

In 1946 Sidney Nolan painted one of the author’s forebears, Katherine Carroll. The artist had read a newspaper report of a woman living on the fringes of the city in a manner long past. His take on her became the painting ‘Woman and Tent’. Carroll weaves her story into both ‘Spirit of Progress’ and that sixth publication, ‘The Year of the Beast’. The earlier novel also features ‘The Art of the Engine Driver’s’ (first in the series) engine driver Vic, his wife Rita, a Nolanesque dauber in Sam and a journalist, George. He is the reporter who has discovered a strange older woman living in a tent, with few of the modern amenities by then taken for granted. Sam is in love with an art gallery owner who, unfortunately for him, is just out of reach, prompting him to consider being part of the diaspora of arty types back to the Mother Country. Meanwhile, a solitary farmer, by whose land Katherine is camped, develops some feelings for her, becoming, to an extent, her keeper. And on the fringes lurks a developer, a portent of the Melbourne to come. 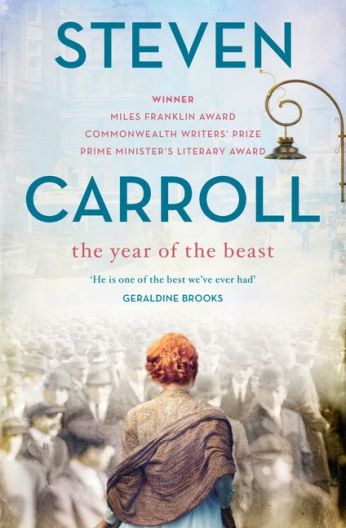 It’s an enthralling read, as is the last of the one’s focusing on this part of the city, but one that takes us from the 1940s back to the conscription debates of the Great War. The normally sedate metropolis is in turmoil, with the seething masses of protesters, for and against, filling the streets. Here we again encounter a younger Katherine as a stern and religious sister to Maryanne, a single mother-to-be with the older woman doing her best to assist in the final stages of her pregnancy. Maryanne has already lost her teaching job because of her dalliance with the child’s father and when word gets out that he is a small town draper of German extraction, she loses her community standing as well. You can imagine how all that goes down back then. In the mix is a footballer who falls from grace, as well, in a city awash with anti-Hun sentiment (shades of today’s antipathy, in some quarters, to those who follow the Islamic faith). He’s suspected of spying for the enemy, whereas it is another secret he is harbouring. Milhaus is assisted by an unexpected ally in Maryanne in his unburdening of it. Then we have Father Geoghan, on a god’s mission to save Maryanne from herself. 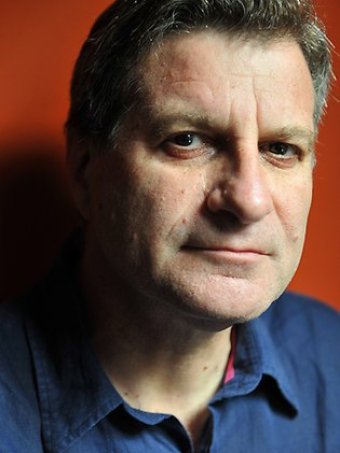 At some stage I must do an audit of what I’ve read of Carroll’s writings and try to fill in the gaps so I can boast I have consumed all of his oeuvre. But never fear – each book can be read as a stand-alone, such is the writer’s skill. But with the six books on the one ‘burb and the three that has Eliot involved, Carroll has created his own ‘beast’. I also loved his earlier works from late last century – ‘Remember Me, Jimmy James’ and ‘The Love Story of Lucy McBride’. If you too decide to slip into some Steven Carroll, I feel confident he will enchant and engross.