You know what umami is? I had to take to the ether (dictionaries being now redundant – and would they carry the word anyway?) and here’s what it said – ‘Umami or savoury taste is one of the five basic tastes. It has been described as savoury and is characteristic of broths and cooked meats.’ It was all news to me, but I checked it out to discern what Terry Durack was on about. I’ll raise it at my next dinner party – ‘Your cooking is terrific. I love the umaniness of this dish I’m relishing now.’ How does that sound? Just goes to show, you’re never too old to learn something new.

I loved it that food commentator Durack describes the black stuff in question as our national ‘salt-lick’. Like all of my generation, I grew up a Vegemite kid and the accompanying short piece bought viscous memories flooding back. The writer recalls it was quite ubiquitous. In his list of the delectable delights its umaminess would enhance back then he failed to mention how it lit up our school lunches. It was pasted between two slabs of snowy white bread. Maybe it was just the black stuff as it provided filling enough, but occasionally left-over lettuce – iceberg was the only choice back in the day – might have been included. Or, if you’d been especially good, maybe a coveted slice of Kraft cheddar. Just hold the tomato – that turned sangars into squishy mush. 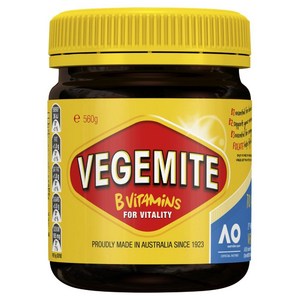 We never partook of Marmite – that was for Poms and wusses. Vegemite was the real deal – as Aussie as Kangaroos and Holden cars. And if the supermarket shelves are anything to go by – see, I’ve done some thorough research for this scribbling – it’s still immensely popular. I’ve noted that Durack adds it to casseroles and stews (what’s the difference?), as well as soups, in a similar way to what I do with that other retro black stuff, Worcestershire sauce.

But then, by my teenage years, I was revolting. I got gastronomic tickets on myself, announced my disdain of the true blue product and switched to – wait for it – Promite!!! Now I can’t imagine why I thought it top-notch, but my dear, long suffering (of my foibles) mother duly added it regularly to her shopping list. My recall of it was that it was a tad sweeter than Vegemite and yes, it is still on supermarket shelving. I checked – is there no end to the lengths I will go for my art? But it takes up little space in comparison to the front-runner. Perhaps I should have purchased a jar and conducted a taste test, but that was a place too far. My lovely Leigh, now and again, has a yearning for toast and Vegemite, so it features in our larder, but I haven’t sampled either product for a good few decades. And, not since my childhood has the umami of that other black stuff tempted my taste buds.

This other tarry substance was a rock solid element of my growing up – all the black muck that sank to the bottom of a bowl of dripping. It was religiously made, or added to, from the oily juices and the scratchings of our regular Sunday roasts by our ever-wonderful mum. Used during the week as a regular spread on our toast for brekkie and for snacks when we were ravenous, it was a true belly-filler. It was fatty as – and the charcoal-coloured bottom layer, if mixed in, gave it great piquancy and flavour. Delicious. Culinary heaven. But what additional oomph did it give to the oversupply of no-nos to my cholesterol count through the consumption of the greasy, oily lard – oh dear. Did it contribute to my high fat levels in later life for which I now take pills to contain? Probably, but I’m still here feeling relatively healthy. And it gave me utmost pleasure in simpler times.

And now Vegemite has gone the full circle and is an ingredient in many dishes in up-market restaurants – it being used, would you believe, as a selling point. Even Blumenthal and goddess Nigella have played around with it. So, three cheers for it being back in Aussie ownership. And three cheers for the black stuff of all our youths, no matter what form it took. Even the tack at the bottom of a bowl of dripping.