On a trip away to Mangoland I spent a few most pleasant late afternoons with Harvey Beam, resting up from forays to the scenic temptations of the Tweed and Byron Shires. He was terrific company, even if he had come down in the world.

I discovered that, since gaining a foothold in big city radio, he had progressed to being the king-pin of the breakfast slot. Even then it was much to his father’s disgust. He was earmarked for far, far better than that tawdry profession. All this Harvey confided to me those sunny afternoons. 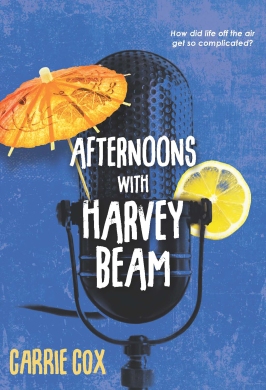 Nothing lasts forever for any of us – not prime time nor life. Eventually Harvey’s ratings decline and he’s shunted to the sleepy afternoon slot, a new sycophantic, fawning and golden-tonsilled brekkie host is unearthed with old Harv starting to feel he’s on a downward slippery slope. And then, to cap it all off, he’d recalled to Shorten, the country town of his upbringing. Here his disapproving old man is gravely ill. On arriving his dad doesn’t want to know him and his brother’s being an arse. His two sisters, to add more to his woes, are cat fighting like there’s no tomorrow. Back home his daughter decides this is the time to have a major crisis and Harvey confides it’s all getting a bit too much.

It sounds dire, but there’s an up-side. He can take a breather and re-calibrate, he tells me. En route he had also met Grace and that may amount to something too. And then, guess what? The local radio boss offers him a time-slot. Could this be a blessing in disguise?

Is Carrie Cox the new Nick Earls? Her style of writing reminded me of the Sunshine State’s scribe at his best. Needless to say, then, I revelled in ‘Afternoons with Harvey Beam’. Earls has been around for quite a while now, but Cox is only starting out. The Perth wordsmith has several other publications under her belt, but this is her first novel. Stick at it young lady. You’ve all the attributes.

One afternoon I was about to doze off when Beam confided to me that his nick-name within the family was Pencil. It took a while for the penny to drop. Harvey Beam. HB. Get it? Clever one that.

An interview with the author = https://www.betterreading.com.au/news/qa-with-journalist-turned-author-carrie-cox-talks-about-her-novel-afternoons-with-harvey-beam/ =