Going to Pat’s; being at my lovely Leigh’s mother’s place, has its fair share of pleasures. Apart from my hand-held device, I know I am going to have days largely free from the digital age. There is also only a single platform with which to engage with the television. And in this golden period of that format, that has its upside. Pat also knows how to tempt me with old-fashioned culinary delights such as sugar free rhubarb, stewed pears and trifle – so I know there’s always tasty fare awaiting. Often Pat and Leigh will head out on shopping expeditions, take in a movie or go visiting extended family, leaving me home alone. So all that, together with an accommodating guest room to retreat to, allows me ample opportunity to write and read without distraction. So the last time we visited, as well as putting to paper a story I’ve had floating around in my synapses for some time, I managed to read two rip-snorter novels in, for me, super quick time.

The lesser of the excellent pair was Jock Serong’s ‘On the Java Ridge’; a riveting and rollicking read, even if at the heart of the matter was our abysmal treatment of many poor souls who dare to attempt to improve life for themselves and family by seeking refuge on our shores Their misfortune is to come by sea. 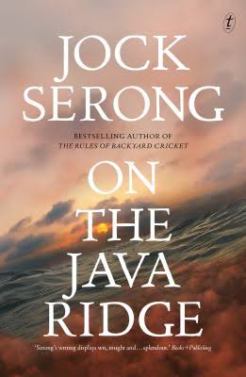 Cassius Calvert is our Minister for Border Integrity. Initially he’s a carbon copy of the odious Dutton, seemingly without one jot of humanity in his heart. With an election coming up Calvert is introducing tough new measures to even further strengthen our security, which, by now, is largely in the hands of a secretive private concern. Of course that’s a sure vote winner if all goes according to plan. It doesn’t.

Meanwhile, out to sea, a collision of sorts is taking place. A state of the art bugi pinisi schooner – look them up, they’re amazing Indonesian vessels – is transporting a group of surfers to a dot in the ocean not far from Ashmore Reef. Heading that way too is the ‘Tukalar’, full of refugees, including a Hazara girl, Roya. With wild weather approaching, Isi Natoli, the skipper of the former boat, seeks shelter at a nearby coral atoll. The storm smashes Roya’s dodgy vessel into the coral outcrops surrounding the safe haven. Isi coordinates the rescue of the survivors, giving them what succor she can from the wealth of supplies in her stores. Luckily she has a doctor on board to assist with the injured.

Little do those struggling out in the ocean realise that this event has triggered a crisis for Calvert to handle. How his government does so is preposterous in the extreme – but then again, once upon a time our country’s present treatment of asylum seekers would have seemed totally at odds with any notion of ‘a fair go’ this nation prides itself on.

The tale is told from the points of view of the aforementioned protagonists, the only downer being the shocking and unexpected conclusion to the saga. But, I guess, sadly with it Serong makes his point. I loved this author’s previous title, ‘The Rules of Backyard Cricket’, but he has written a different beast here. I wonder what’s next for Jack? Whatever he tackles, I’ll be waiting with my hard-earned in hand.

As good a read as the Aussie author’s was, Matthew Quick’s ‘The Reason You’re Alive’ topped it – what an ace novel. It may well be my book of the year. That will take much ruminating, so we’ll see. 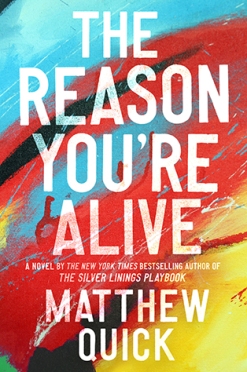 This writer’s claim to fame is that he penned the title which became that wonderful film ‘The Silver Lining’s Playbook’. Knowing how much I adored that, darling daughter gave me his latest title as a birthday gift. I was hooked right from page one through to its not so shocking nor unexpected ending. That being said, though, there were more than enough surprises en route – but, be warned, the language from the old fella, the main character – a true scene stealer – is rather fruity.

Yep, I became very enamoured of Vietnam vet David Grainger. He’s an ornery curmudgeon, initially resembling an American Alf Garnett for the digital age. He intensely hates Obama and any governmental interference in his life. Also, on his hit list, are Muslims, his son’s Dutch wife and the ‘gooks’ he fought against in the conflict. No doubt he would have loved Trump as much as he does his guns and the camouflage he chooses to wear in his daily life.

Yet Grainger is surprisingly an easy guy to fall in love with, just as long as you don’t have to live with him. Very early on his touching relationship with granddaughter Ella softens his tough facade. Despite being outwardly homophobic, racist and a misogynist, he has a special relationship with a gay man as well as a woman of Asian extraction. He fervently dislikes his son’s girly-man demeanour, but as we turn the pages, there comes a semblance of a bond. An accident and brain surgery has left ol’ Dave largely reliant on others – and there’s a wrong to be righted revolving around the mysterious Clayton Fire Bear. As well, his beloved wife’s demise weighs mightily on his mind, as does the destruction of her art work 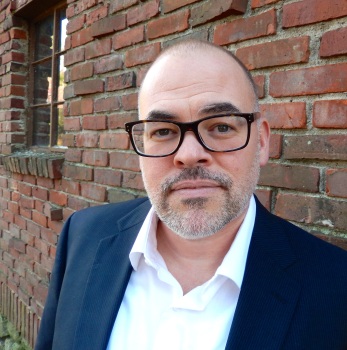 Miramax has already optioned ‘The Reason You’re Alive’ for a proposed movie. Who could play our anti-hero? Jack Nicholson? Jeff Bridges? Bill Murray? Fingers crossed it makes it to the big screen, I’ll certainly be lining up. Not all went well for me on this latest trip to Pat’s, but with such addictive books to read and my lovely lady keeping a good eye on me, I was in the best of hands.