It must be every parents’ nightmare. Parents would seem to have so much to worry about in this fraught age we live in without that. Seeing ‘Berlin Syndrome’ put me in mind of the Graeme Connors song, ‘Louisa’, a later highlight of his career –

A father, worrying himself sick over a daughter travelling in Europe, imagining all those ‘crazy bastards out there‘, willing to take innocent life in the name of crackpottery. And in the film offering, the travelling girl sure meets one crazy bastard in Andi (Max Riemelt). He, despite outward appearances, is completely off the show. Thankfully my own daughter’s travels in Europe were in the company of her good man. If your own footloose treasured one cannot be convinced against soloing it through Europe these days, you’d be wise to not go and see this – or, perhaps even better, get her to view it. 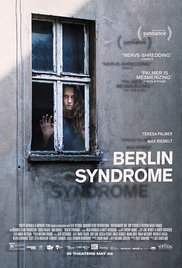 Andi has seriously nasty intent towards Clare (Teresa Palmer). Normally an offering about a guy lording it over a girl he’s trapped in a room, preparing to do dastardly acts to her, is not one I’d rush out to see, particularly as the esteemed DS – we all know who that is – dissed it in no uncertain terms. As well, there were plenty of other films beckoning at my art house around the time. But it captured the attention of my lovely lady’s equally lovely daughter, after she’d watched a promo of it on the tele, so she sweetly nagged me to add it to my list. For all her admirable talents I find Ilsa someone it’s hard to say no to, so off I toddled.

Now I cannot pretend I thoroughly enjoyed it, but with director Cate Shortland at the helm – after all she did give us the very worthy ‘Somersault’ – it was somewhat more subtle than what I would take to be the norm for this sort of thing ie, a fantasy project for male auteurs. Does Clare get a dose of the Stockholms, or is it just a matter of taking the course of less resistance as she tries to find a chink in her captor’s armour and seemingly inescapable digs? This is as far away from ‘Fifty Shades…’ as it is possible to get. It’s Berlin in wintry and dun-tones; our heroine’s confines being in the grottiest of neighbourhoods; with this being essentially a two-hander between the leads. We have a largely pointless sub-plot involving Andi’s father – set up, I presume, just to allow for a tender moment between captor and victim. Andi is also making eyes at one of his students – he’s an English teacher, you see – but this goes on to have much, if confused, relevance for the climax of the piece. The movie is stretched out to a long couple of hours and I wasn’t too sure about its eventual ending, but it’s certainly a brave performance from Palmer. Clare displays plenty of Aussie grit and determination in her attempts to get through her ordeal and ultimately it does possess much to recommend it.

I must be missing something. She’s good, no doubt about that. But ‘World’s Greatest Actress’, as she’s spruiked for this film – well, there’d be a few English dames who’d have something to say about that, not to mention Streep, Blanchett and I could go on. And in no way was ‘Things to Come’ ‘One of the Best Films of the Year’ nor was it ‘A Stunning Achievement’ and it sure wasn’t ‘Perfect’. ‘A Quiet Jewel’? Well, maybe, as long as it was a lesser stone. It’s certainly not a diamond.

It isn’t that Isabelle Huppert doesn’t have acting chops – she does, in abundance. She’s brave and does French sang froid very well. In this she showed more nuanced emotion than is usual for her. But it’s boring. The film is simply boring. I struggled to see it through and in the end was thinking about my bladder far more than what was going on up on the screen.

‘Things to Come’ is from the producer of ‘Rosalie Blum’ and the director of ‘Father of My Children’ – both excellent. But here, together, they have come up with something far less than the magic of those two. And, sorry if I let the cat out of the bag here, but the ‘romance’ that watching the trailer led us to believe was going to happen between younger man/older woman just didn’t occur – apart from a couple of meaningful looks.

Parisian teacher of philosophy (Huppert) gets high from intellectual discussion and is quite stunned when she discovers hubby (Andre Marcon) isn’t going to love her forever for it. She wants to know, in typical French fashion, why he simply couldn’t keep his dose of the Peter Pan’s, resulting in an affair with a younger woman, a secret from her. But he was forced to spill the beans by their not so understanding daughter. He soon departs, around the same time as she is dropped by her publisher – her texts are no longer flavour of the month with the student cohort.. Her mother, compounding her woes, is starting to lose the plot, leaving her with a moggy she definitely does not want and needs to quickly find a home for. Trips away from Paris to the Brittany Coast and into the mountains abound Grenoble – the latter with that spunky young hunk, who has his girl friend in tow, help to clear her mind.

Gradually she accepts her situation and moves on, but I really wanted more bang for my buck with this. I was sucked in by the hype and the full page ads for it in a certain Melbourne newspaper. But, sorry Isabelle World’s Greatest Actress, your film comes up way short here for this punter.