My wont each morning, around seven, immediately after I arise from my slumbers, is to stand in our little back room, here by the river, to look out at my twin mountains. The window that faces upriver affords me a view of twin-humped Dromedary, the down river aspect leads my eyes to the organ-piped ramparts of Mount Wellington. These days many Tasmanians, myself included, prefer the name our first peoples bestowed on it – kunanyi. Its original name, early on in colonial times, was Table Mountain, before being rebadged after Waterloo. Some mornings neither mountain can be espied due to them being cloaked in mist, cloud, or the jerry coming down from the upper valley. Often one, or both, are iced by snow. If this is the case with Dromedary, we know during winter that yet another layer of clothing needs to be added. Both river and twin mountains, despite their ever changing moods, soothe me from the get-go; they set me up for the day ahead.

So it is perhaps circumstance that I was destined to read twin books, on booksellers’ shelves around the same time, where a local mountain shaped the fictionally occurring events.

One of the authors, Sean Rabin, at an early stage in his release, ‘Wood Green’, listed those on our island achieving success following the vocation he would seem to have a future in, given the quality of his first attempt. The reader was informed, via the voice of a taxi driver, that in our country’s literature, Tassie’s contribution is ‘bigger than you think.’ He was not only a verbose but, as well, an extremely well read cab driver, at least as far as his state’s product in print was concerned. ‘Well of course there are your notables like Richard Flanagan and Christopher Koch and Amanda Lohrey, but I bet you’ve never heard of Joan Wise or Nan Chauncy, have you?’ He then went on to list names commencing with Marcus Clarke and ending with Heather Rose, Gina Mercer, Katherine Lomer and Adrienne Eberhard. The fellow finished off by stating that he too was working on a novel – about the island’s early whaling industry.

I wondered, on reading those passages, if Sean himself, or perhaps Sarah Kanake, the writer of the other tome, ‘Sing Fox to Me’, would one day be spoken of in the same terms as the aforementioned? I do suspect Ms Kanake is the more likely, but time will tell.

And that is not to say that Rabin’s ‘Wood Green’ is a failure by any measure. It is a fine effort really; eminently consumable, but aspects did annoy me. It is lovely to read of my island’s multitudinous virtues, but at times the novel invoked a travel brochure designed to attract people to spend their next hols with us. And the constant reference to cutting edge music made me wonder as to Rabin’s motivation – in doing so does he think his readers will rush to YouTube to have a gander at what he was on about? For a while I thought that these too may be fictionalised as I hadn’t heard of any of them. Then I came across one I knew – Judee Sill. Usually each was accompanied by a precis as to why the musician(s) resonated (so hate that word) with one of the writers in residence in the village of Wood Green. There were similar literary references as well, again obscure – to my knowledge. Just get on with the story Sean. It is a cracker you have come up with. And otherwise, it did have me engrossed. 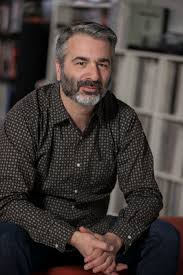 As with ‘Sing Fox to Me’, the fulcrum of this tale is a cranky old man – in ‘Wood Green’s’ case, the renowned, but reclusive, novelist Lucien Clarke. He lived on kunanyi’s shoulder, in a hamlet perhaps modeled on Ferntree or Longley. The old guy has employed Michael, a man in search of a new start and for whom the author was the subject matter for his uni thesis, to get his affairs in order. Of course, Michael Pollard also aspires to write something or other himself. The location for most of the action has a mix of characters who would do a tele soap proud. There’s a gay pub owner and a gay South African, with something to hide, about to take over the local store. Now I wonder what could happen there? The former owners, an estranged couple, have had enough. One just happens to be Lucien’s ex-lover, still hankering for his ministrations. There is also a b and b owner described by the cover blurb as ‘snivelling’. But the mix, like a compulsive soap, does get one in. The chapters are short and sharp, all 104 of them – and with the last score or so the novel does an about face and it may not be to everybody’s taste. But this scribe thinks it works just fine. As for the ending, well even a soap wouldn’t countenance going down that path.

There does need, I feel, to be more discipline with Mr Rabin’s self-indulgences, but he has come up with a great yarn about my city and its mountain. I’ll be lining up for his next release.

But, to my mind, of higher literary excellence was Sarah Kanake’s ‘Sing Fox to Me’. The Sunshine Coast lecturer and country music singer possesses some serious writerly chops.

The fellow in his winter years in this story’s case was Clancy Fox. He lived alone, but for his ghosts, on a mountain with a bleak and pluvial climate. The mountain’s elder is still, many years later, grieving for his lost daughter, River. ‘People say there’s no pain like the pain of losing a child and Clancy knew the truth of that more than most. He knew the missing, the aching. He knew the unending, circling misery of letting a child slip through his fingers, but he also knew the sorrow of forgetting and being forgotten.’ Now it is Clancy’s habit to go feral, to strip naked, wearing only a tiger skin, when he heads bush in search of his child. She may still be out there – out there somewhere with the tigers. River claimed to have seen them everywhere whilst she was alive – the old man sees hints of them in the shadows.

But then his other offspring turns up – the estranged David. He is in dire need of ‘finding himself’ after a marriage breakup, but first needs to dispose of his own two sons. He dumps the twins, Samson and Jonah, with Clancy and promptly shoots through. The old fella, with the aid of other local rustics, does the bast he can, but he’s no match, particularly for the disturbed Jonah. Samson, conversely, is a lovely creation from Kanake. He has Down syndrome, but this does not prevent him from becoming the most engaging of the denizens of ‘Sing Fox to Me’. This is particularly the case after meeting another damaged young soul in the surrounding bush and this soon forms their playground. But all is not right with Jonah. He does a runner, the community groups around old Clancy in his time of need, but soon there is yet another mystery to solve.

Ms Kanake, through very fine wordsmithery, evokes and enhances many of our island writers’ penchant for the gothic nature of our past – something that endures and afflicts to the present day. There’s some magic realism afoot too in this book, as there is in Rabin’s. Neither author bangs us on the head with it, but it’s there, lurking in the background.

So what we have are twin offerings, both thoroughly worthy of a reader’s time. It will be interesting to see if Kanake and Rabin kick on after these debuts. Meanwhile, this old bloke, not on a mountain’s saddle, but constantly peering each day to the high country surrounding the river he loves. He measures the mood of kunanyi and Dromedary – these being the twin mountains of his his own contented existence.