My lovely lady was in need of connection to social media and we were far from home, visiting the warehouse franchises at Devonport’s Stony Rise. It seemed the only available wi-fi was at the adjoining McDonald’s and therefore it was necessary to put aside my natural disinclination and enter. It would be the first time in more than a decade I had done so and despite the ‘classy’ ads that now attempt to sell it as a more upmarket option, it seems little had changed from my previous forays back in the mists. There was an unattended pool of unidentifiable liquid to be stepped over at its entrance and at that time of day the place seemed full of acned, lank-haired youth all working away at hand held devices – either that, or young mums with snotty nosed toddlers from the bogan side of town. Obviously, to use their facility, we needed to order some tucker. I scanned the unappetising menu board and asked for one of the cheaper burgers. It arrived in a grease-smattered brown paper bag and the contents reflected that. Inside two thin slivers of a bread substance was a grey slab of presumably meat product accompanied by a tired bit of lettuce smothered in bright yellow mayonnaise. It tasted of nothing and thankfully was gone in a few mouthfuls. I was thankful to be out of the place once Leigh had completed her time in cyberspace. It’s a similar story with that other ubiquitous provider of fast tucker, KFC. I must admit I do find their offerings much tastier, but it’s the sourness in the tum and the foul-breathed belching after consumption that turns me off their product.

Of course it’s not only in take-away food that the franchise model, in the retail world, has taken over. It abounds everywhere – a by-product of globalisation, nudging out all forms of local individuality in the selling of consumer items. That’s why I love strip-shopping streets in the inner suburbs of Melbourne, but even these are under threat as the big guys circle.

I think it is incredibly ironic that the word franchise, derived from the French, means to ‘free from servitude’. I wonder if the employees of 7-Eleven have felt much of that freeing feeling in recent times?

So who is to blame for all this? Who came up with the notion of franchise? I almost used the word abomination, but that is far too strong. If I think about it, much of my retail therapy is, nonetheless, carried out, reasonably enjoyably, in such outlets.

If we delve back to when it first came into being we can blame a country (the US, who else?), a religion (Christian Science) and one incredibly impressive and entrepreneurial woman (the remarkable Martha Matilda Harper). Had she not come along, I daresay someone else would have hit on the notion, but she was the first to build something almost from nothing. Hers is a story worth the telling. So thank you Katie for bringing her to my attention.

She had longevity, did Martha Harper. Born in Canada in 1857, she passed from the planet in 1950. The Ontarian was one of ten offspring and she was bound out – ie, placed in that aforementioned servitude, to assist her father, a struggling tailor, support his large family. It was during this time, labouring for a holistic physician who took a shine to her, that she was introduced to her lifelong passion. He was an atypical character for the time who believed that good scalp care was fundamental to well rounded health. Robust brushing of the hair was, he taught Martha, essential to virile blood flow – that and the application of his hair tonic, made to, what else, a secret formula.

It was his death in 1881 that set her on her life’s path as he passed on the recipe for his tonic to Martha in his will. Later that year she crossed the border to settle in Rochester, New York State, still as a servant – this time to one Luella Roberts. She soon gained a reputation within the circle of her employer for her hair dressing abilities. In those times this was all done within the household, either by servants, or independent hair specialists making house calls.

As the new century approached the US was abuzz with entrepreneurial fervour and change. Even in Rochester there was talk of votes for women. It all filled Martha’s mind with possibility – even the idea that a lowly servant could become part of the American dream. She had squirreled away some savings from her servitude over the years and toyed with the whys and wherefores of transforming her hair skills into a business proposition. But, before she could advance that idea, she fell ill. Her treating doctor just happened to be a practicing Christian Scientist. His success in bringing her back to fine health caused her to become a follower of his religious persuasion with the words of Mary Baker Eddy being firmly implanted in her mind.

Martha soon felt well enough to start to pursue her dream. She figured that her long years in service made her fully aware of how to pamper her social betters and a notion formed that it could be done more economically from a shop front than trailing around to the abodes of prospective customers. Chancing her arm, she used her meagre savings to open up in downtown Rochester, quite near, in fact, to one George Eastman who was setting up Kodak with similar hopes for success. Both businesses thrived. Hers was aided by the fact that she purposely invented a reclining shampoo chair to add to her customers’ comfort. The prominent citizenry of the burb flocked to her premises to partake of her salves to their busy lives. And she was the best possible advertisement for her own brand of hair care. Just look at her locks in the accompanying images. Did Eastman photograph her? I wonder.

She soon came to have some very highly esteemed spruikers too for her talents. There was Mabel Bell, missus of the supposed inventor of the telephone; suffragette leader Susan B Anthony and even a first lady, Grace Coolidge. Due to her success, it was suggested to her that she establish another outlet for her wares and procedures in the Windy City to open in time for its World Fair of 1893. As she couldn’t be in two places at once, she decided it would be an agent of the mother shop, run by another, but to her strict guidelines. Thus it became a franchise – even though this term for what she initiated did not come about for some time. This model was based on how the Christian Science church thrust out its tentacles across the nation. And after the success of the Chicago venture, Martha used the same formula for further expansion.

All products sold by her agents were manufactured in factories she set up, all staff had to be trained in her special schools and she instigated national advertising campaigns just as that industry was starting to take a form we would recognise today. She maintained the strictest quality control with all products being organic – untouched by the chemicals that her competitors, when they got going along similar lines, were enamoured of. Martha made it her calling to employ only servant girls or poor working class women. The Harper Method, as her franchising became known, had a humane heart at its core, although it catered mainly for those from the top end of society. She was an early exponent of tycoon philanthropy. How refreshing compared to the oft corporate greed of these times, although, of course, there are many who still follow her example.

Her heyday were the twenties and Harper’s Harperites (agents) strove to bring out the beauty of the inner woman, later turning their attention to their men folk as well. Over time her prominent customers included Danny Kaye, European royalty, the Kennedy family, Lady Bird Johnson and even the German Kaiser.

When she attained the age of 63 it was time for Martha Harper to start to wind down her own involvement in her company’s affairs. She married her 39 year old assistant. He took over the business and ran it till 1972 – twenty odd years after Martha’s death.

In wedlock she was never Martha McBain, again bucking the norm by retaining her maiden name throughout her long life. She had the same attitude way back in 1900, attending classes at the University of Rochester, despite the explicit by-laws banning women from doing so.

Her story makes me wonder if the American dream is still possible in the US for women from her type of background. The recent film ‘Joy’, based on a true story, suggests it was still an attainable goal at the end of last century, but today? I wonder if even Martha Harper dared dream of a woman President, let alone a black one? 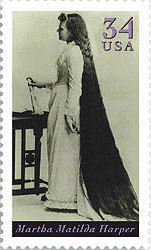