The surfing miner felt unfulfilled. Sure, there was great money to be had underground digging out what is so vital to the nation’s financial health, but now he was grounded from both his passion and his work place – one on the sea, one in the bowels of the earth. He needed something to take his mind off the damage done to his right knee that would leave him incapacitated for six months. His brother and sister were both fortified with their engagement in artistic pursuits, so he looked to that area for inspiration. He picked up the expensive camera he had treated himself to a while ago, then had put aside due to time constraints – now he had no such excuse. Gradually an idea took hold and he clicked on to the ether to see if he could make it pan out. 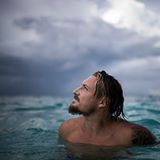 That was back in 2007. Fast forward to to the present day and the thirty-two year old, on the basis of what he taught himself to do back then, has seen his skills taking him all over the world – even to dipping his toe in minus twenty degree water off the coast of Iceland. He now combines his first love with this recently discovered expertise to win accolades and awards world-wide, as well as a handy amount of pocket money.

I initially encountered Ray Collins one Saturday morning, earlier this year, on opening the Weekend Magazine supplement of the Oz. Within there was a quite stunning photograph that took me away from a disappointing Tasmanian summer to a place where I know the weather is blissful in all seasons. Fusing glistening water and a bright blue-hued sky, the snapper had captured a gloriously perfect wave in the instant before breaking. And through its tubular pipe we get a glimpse of a coastline fringed by sand, pine trees and Coolangatta towers. I took to my laptop to find out more about the obviously talented creator of such an image.

During his time away from the coal seam and riding the white horses of the sea, Ray discovered that he was quite the camera-smith once he mastered the intricacies of his rediscovered purchase. But now it came time to find out if the theory of his nub of an idea could be put into practice. Maybe in doing so he could match his siblings and produce works of beauty too. He has done that in spades, but it wasn’t easy. First he needed to outlay some cash, not a small ask when he was on half-pay, to see his vision realised. For three thousand dollars he purchased himself a housing unit – all to take his camera to sea.

The tough going didn’t end there. Although technically he was the match for any other surf-snapper, there was nothing in his photos that stood out from dozens of other practitioners. He needed an angle. He decided to break away from the convention of man’s (and woman’s) mastery of the breaking swell. He resolved to focus on the wave itself – its ‘…textures, colours and purity.’ He wanted ‘anticipation’ in his product – and he worked at it till he achieved that aim. He attained his goal. Surfing magazines more readily came to pick up his depictions and eventually he came to the notice of the guru of his art in the States, Larry Moore, who took him on by awarding him one of his prestigious mentorships – the first Australian to be thus honoured. He was set.

Following on from that, he has won just about every gong going in his field and he services a list of international brands as long as your arm with pictures for their advertising – Qantas, Red Bull, Apple, United Airlines just to cite a few. Each day he has to sort through several hundred emails, all clamouring for permission to use his work for a multitude of purposes.

Attached to this, though, there are two rubs. The first is that he still works away at that coal seam. Despite his international repute, income from his output with the camera is still fluky and he needs the stability of a regular wage in his life. He is not one to go simply where the waves take him.

Rub number two? He will never see his images the same way as you and I do. Ray Collins is colour-blind.