For the UK, seventy years ago this week (at time of writing), the long wait was over. Since D Day Allied forces had been pushing east, with other forces fighting up from the underbelly and the Russians heading towards the heartland. Germany was finally done for, an evil regime consigned to history. In the streets of the British nation, on the day the official announcement was made that hostilities had ceased, as well as later in entertainment venues across the country, it was party time like there was no tomorrow. It was VE Day.

We know where she was playing that night of VE Day. At the personal request of Field Marshall Montgomery her band had been flown to Berlin to perform at a concert for the troops celebrating that their time in a war zone was soon to end. Christmas that year saw her back in Germany broadcasting, for BBC radio, from Hamburg, to the folks back home. Her girls’ show followed the King’s speech.

We all remember the great entertainers of those dark war years – Dame Vera Lynn and Glen Miller, for instance – but few these days remember her. But back then she was a household name and was arguably the most ground-breaking musician of her time.

When we think think girl bands of our own era, names like the Spice Girls and the Supremes would probably hit our synapses first. But after more consideration, well, they didn’t play instruments, did they? Delving further, then, we possibly would come up with the Bangles and the Go Gos who did – but all-girl bands are, even today in this enlightened age, few and far between. There are plenty of women playing in bands, but an all female gendered one is a rarity. It was the same back in the forties, but Ivy Benson set out to change all that.

1913 saw her emerge into this world atop the Malt Shovel Inn in Leeds. Her father was a musician. Digger Benson taught her the piano and by nine she was a regular performer on the local circuit and on radio in her city. By her teens, under the influence of Benny Goodman, she changed her instrument to the clarinet first of all, then later the saxophone. On leaving school, for a while Ivy worked on a factory floor, but soon music took precedence. She turned professional and left for the bright lights of London. She was quick in establishing herself due to obvious talent and her glamour. It was then she had a radical idea – she would form an all girl band. 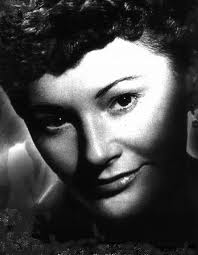 She knew to be successful the members would have to look the part, so she set about designing some alluring outfits. Above all, though, they had to possess the necessary musical chops. From her own territory in the north, with that area’s brass band heritage, she found a ready supply of young misses with what she was looking for – and she did need a steady supply. Many were no sooner up on stage than they were being courted. It was 1939 and the country was at war. Armed forces’ personnel were looking for comfort before they headed off, or later, when on leave. This often blossomed into romance and marriage in these desperate days – which, of course, back then precluded marrieds from continuing on in the band. When American GIs hit town the problem was accentuated. Despite that, shortly after their formation, the band was winning accolades and excellent reviews for their shows, despite the addendum that Ivy abhorred – ‘for girls’. Her band was packing them in in dance halls all around the country and she hit the big time when her troupe performed at the Palladium and Covent Garden. Then in ’43 the BBC came calling and invited Ivy to become one of the broadcaster’s resident dance bands – and the shit really hit the fan. The furore over this became known as the Battle of the Saxes.

It seemed the BBC’s decision was an affront to male musicianship and the Musician’s Union set to work to put matters right by sending a delegation to the top brass of the Beeb in protest. But her popularity ensured that, despite this brouhaha – or because of it, the Ivy Benson All Girl Band remained on everyone’s lips. She personally was receiving over three hundred letters a week in fan mail, mainly from besotted servicemen. As the Allies closed in on their prey after the 1944 landings – Ivy and her girls were close to the front entertaining them every inch of the way

There were usually around twenty musicians under Ivy’s charge and their signature tune was ‘Lady Be Good’. She led her band, in various guises, until well into the 1980s. It is reported Ivy loved bling in all its forms, was partial to a tipple and that her private life was always in a state of flux. Although she married twice, she couldn’t hold on to a man because of her constant touring – they always had affairs in her absence – or so she said.

Through her bands hundreds of women went on to professional careers in music – and Ivy helped make that not only possible but perfectly respectable for them to do so.

In her seventies Ivy finally retired, although she’d still occasionally perform for charity. Her friends were by now actively lobbying for her war efforts to be officially recognised and three months before she passed away, she was informed that she would be made a Dame. Sadly, before she could be invested, death took her. Damehoods cannot be given posthumously.

It is appropriate that today her memory is being championed by another force of nature in the annals of girl power, former Spice Mel C. She wants Ivy Benson to be granted the recognition she so richly earned for the light, colour, hope and glamour she provided in dark times. Those who know Ivy B’s story are hopeful Mel C will prevail, as Ivy did all those years ago.

On the 8th May, 1945 – that is, VE Day – around the same time as Ivy Benson was getting ready to lead her all girl band in entertaining the victorious troops in Germany, a large crowd was gathering outside the gates of Buckingham Palace, back home, in the expectation of an appearance by the Royal Family on the balcony. Now, if you believe the hokum hoisted on us by a ‘A Royal Night Out’, the two princesses, Elizabeth and Margaret, nineteen and fourteen respectively at the time, were on the wrong side of those gates, celebrating with the great unwashed.

Yes, history tells us that the young princesses did leave the confines of the palace that night and tottered off for some prim levity at the Ritz, heavily chaperoned of course. The premise of this production is: what if they deviously jilted their minders – an unlikely pair whose preference for a jolly time overrode their instructions re the royals – and made a bid for freedom? It then goes on to imaginings of all their adventures. Despite their quite chaste behaviour, given the often tempting circumstances, whilst off the leash they certainly had a hoot – truly a night to remember.

Now do go to this offering in the right frame of mind. Suspend belief and not look at the plot line too critically. There are holes as big as the House of Windsor in logic with the piece from director Julian Jarrod.. Some of the acting is also a tad ‘how’s your father’ – but ignore all that and you’ll be fine. I thought it most delightful.

The recreation of that ‘roll out the barrels’ night of nights around London was terrific with all and sundry letting their hair down after all that ‘stiff upper lipping’ during the war years. There’s a hint of sadness there too for those who didn’t make it back. I loved Rupert Everett as George VI although, as was rightly pointed out to me, he looked little like the real deal. Canadian actress Sarah Gabon was our present Queen back in the day when she was known as Lillibit by her nearest and dearest – and she is charming as the more sensible, the more restrained of the duo. Although Beth Powley has been praised for her depiction of Margaret in some quarters, she just gave me the irrits with her over the top ditziness – as well as the fact that the cove she picked up to be her squire for the evening looked old enough to be her grandfather.

Many have likened this to an old fashioned romp in the manner of the much loved ‘Carry Ons’ of days of yore. I had a ball with this and my lovely Leigh thought it all quiet uproarious. I had constant digs in the ribs to contend with. I can imagine her back on that night – she would be into the spirit of it for all she was worth. That being said, let’s just hope there’s never another.