Yes, mistakes were indeed made and semi-novice wordsmith Pieper outlines them in fine humorous fashion in his collection of four essays for the Penguin Specials series. You too can read all about this fellow’s misdemeanours by shelling out a cheap ten bucks at your nearest quality book store. 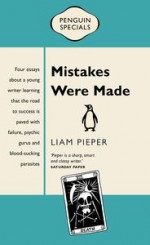 Who knew that trying to secrete one’s person behind a compliant steed to escape the predations of a whacked-out ageing hippy priestess would cause a doctor to scream in horror? Who knew that selling dope to your alternate lifestyle parents as a teenager, then writing about it, would be enough to force a person to flee the country? Who knew that attempting to enter the good ol’ US of A with the book telling that tale would almost get a person, courtesy of US Customs, on the next plane home? Who thought that inviting mad dog Geoffrey into a person’s life as an act of kindness would cause such mayhem to ensue? The crazy canine, for me, steals the show completely.

On a more serious side, implicit in Pieper’s musings are the vagaries of the writerly life.

But this small volume is a delight from cover to cover – and as such will be recycled through family and friends. The notion behind the Penguin Specials are that the books in the series can be read in one sitting. I’m never one to thrust what I have enjoyed on others unless I know the territory well. My hope is this works in reverse as well. Some know my predilections well and I am always happy to receive their recommendations, but when I feel obliged to work my way through a thousand page tome out of friendship, I can have a miserable time in doing so. I am always loathe to offend and cannot say no – so I am wary of doing the same. But in this case there are no issues and I’ll recommend it to all and sundry. I cannot imagine anyone failing to be amused by Pieper’s yarns which are, as he puts it, ‘…a kind-of-sort-of sequel’ to his first publication, ‘The Feelgood Hit of the Year’ (Penguin). I am now keen to get hold of this. I only hope we see much more in book form from this talented communicator despite the scrapes that doing so may lead him into.

5 thoughts on “Mistakes Were Made – Liam Pieper”