I have a penchant for beautiful women. Nothing unusual in that – most men do. But I am particularly interested in beautiful women who, in some way, have imposed themselves on their times and/or communities – and not the ones we all know. I like going into the ether and researching, maybe even writing up, those who are relatively obscure but nonetheless pique my curiosity. I have blogged about an artist’s muse; a writer’s lover; a photographer’s model and sundry women who have broken through the glass ceiling in their own eras. The stimulus for this may be an obscure reference read in book, or broadsheet; it may be a painting or, as in this case a supposed portrait of a cartoonist’s inspiration. And what I can’t discover, I am at liberty to make up!

My writerly daughter knows this. BTD (Beautiful Talented Daughter) has taken to sending me images that she feels are worth investigating. The one you espy on this page arrived with the challenge, ‘Here Dad, see what you can do with this.’ On it was attached the caption, ‘Was this black woman the inspiration for Betty Boop?’

Suitably intrigued, I took to said ether – and, yes, it did end up leading me to quite a tale of not one, but four, beautiful women. One was a darling of her age and two certainly gave their times a shake. And the other one – well, we’ll come to that.

Now most of us know Betty Boop – still an icon of popular culture decades after she first emerged from an animator’s drawing board. She initially became a sex symbol for the Depression era and was a bold woman when bold women were decidedly not in vogue. She was conjured in the studio of cartoonist Max Fleischer and first appeared in the Talkatoon series for Paramount in 1930. Initially she was portrayed as a female canine, but was soon morphed into the figure we all recognise. She was appearing in her own cartoons by 1932 – a feisty vision of short cropped hair, big eyes and even larger hoop earrings. And she was decidedly white. 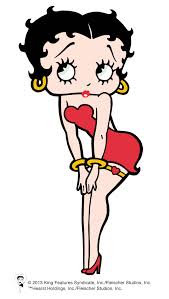 Now the image that came to me, via my BTD, features a lookalike of opposite skin tones, certainly a stunning appearing woman in the vintage style of the flapper age. She is a dead-ringer for Betty Boop. It claimed to be a period portrait of one Esther Jones. So who was she and what evidence is there that this beauty was indeed the inspiration for BB?

Typing the name into Google the sent image certainly appears, but it also doesn’t take long to figure out all is not as it seems here. If we turn our attention to Wikipedia the image it uses for Esther Jones, to my untrained eye, looks much less like an Afro-American version of BB than the one that started this inquiry. What is going on? We’ll investigate further. 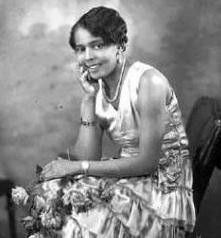 Well it seems this lovely Ms Jones invented the Boops. She was a performer at Harlem’s infamous Cotton Club during the Twenties, operating under the moniker of Baby Esther. The Boops, a form of scatting with a child-like voice, later became the Boop-Oop-a-Doop, sometimes referred to as Baby Style. If you are aware of the song ‘I Wanna be Loved by You’, you know what’s happening here – and this style, of course, was part of the package that Betty B presented to the world – thus the connection to the black chanteuse. Esther died in obscurity in 1934 – but, as we shall see, her name resurfaces later in this tale.

Now the star who hit paydirt with the Boop-Oop-a-Doop was performer Helen Kane, an actor/singer who reached her peak of prominence slightly later than Jones. She went on to make movies in support of icons such as William Powell and Fay Wray – even topping the bill, in her own right, in one Hollywood product. But her ‘fifteen minutes of fame’ was fading just as Betty Boop’s was rising. She quickly realised certain similarities between the animated figure’s looks and voice to her own in those departments, particularly considering the use of the Baby Style. It seemed to her there was more than just a passing, accidental semblance to the Fleischer Studio creation. Kane was, as well, thoroughly white. Surely then Paramount et al were taking liberties with her image and voice, liberties which, after consulting legal people, she came to realise could be more than a nice little earner for her and would set her up for her existence post-celebrity. Kane vowed they weren’t going to get away with it. She sued the studios for the then astronomical sum of a cool quarter of a million green ones. They’d pinched her style and used it for their financial gain – she was therefore deserving of her piece of the action. 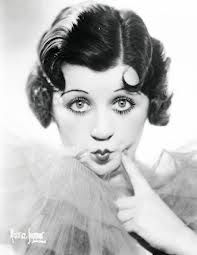 The rub in all this was that it could be proved that, late in the previous decade, Ms Kane had visited the Cotton Club and caught a song or two from Baby Esther. Several witnesses testified to this effect – so the Boop-Oop-a-Doop was not her creation at all. It didn’t seem she had a leg to stand on. Ms Kane did not own the style so the judge found against her. Kane passed away in 1966, aged 62. In her remaining years she married several times and earned some peanuts appearing on shows such as Ed Sullivan as the Boop-Oop-a-Doop Girl. There is little doubt that BB’s vocalised stylings are based on Kane, but it seems visually Fleischer and his crew were hooked, along with most males in the US, on the surfeit of attractions posed in the one beauteous form that was the twenties ‘It’ girl, Clara Bow. Weight is added to this being the case by the fact that the Tinseltown superstar actually voiced some BB offerings, particularly when she sang ‘I Wanna be Loved by You’. Ironically, Kane’s voice, was also used, but mainly she was voiced by another lookalike – actress Mae Questel.

So now, seemingly, there remains just one question – if the original image was not of Esther Jones, then who was the BB black doppelganger? Again the ether quickly provides an answer – this taking the story all the way to the Ukraine. Here there are a team of photographers who refer to themselves as Retroaletier. As the name suggests, these aficionados of times of yore are, not unlike your scribe, fond of beautiful women thrown up by the past – and use young models to, as accurately as possible, portray them. Of course, back in the Thirties, BB was all about style and non-repressed sexuality (some of her cartoons faced the wrath of the censor). Retroatelier found their BB in Olya, skilfully posing and kitting her out to resemble this ‘…time-honoured archetype of female allure…’ And obviously they were aware of Esther Jones’ role in it all, thus Olya is/became a comely black girl. Now, if you are thinking about checking out the work of Retroatelier for yourselves, just be aware some images are NSFW. They are also the perpetrators, perhaps inadvertently, of a minor internet hoax.

So thank you BTD for passing on the image and leading me, hopefully successfully, to produce an interesting story from the challenge. Pleasingly there is already another image from my daughter waiting for me to investigate. I love it. I so enjoy putting together these retellings.

2 thoughts on “Chasing Betty Boop All the Way to Ukraine”