The Man Booker winning author was asked to describe, at short notice, the city of Hobart – the city he has chosen to be his home on my island in the southern seas – in a couple of sentences. This is what he came up with:- 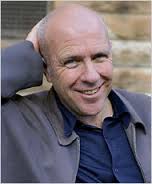 Nestled between the foothills of a mountain and set against one of the most picturesque harbours in the world, yet urban and urbane, Hobart resists clichés . Old but young, gentle yet vital, cultured and vulgar, Australia’s oldest pubs and newest museum nudge and jostle each other into a city that belies its size with the charms of another country still undiscovered by most Australians.