Winter, 1981. It was a real winter in this other hemisphere, but still one on the cusp of spring, when an euro-train took me to Copenhagen. I remember only a tad of that time, but I recall being very surprised at just how tiny the Little Mermaid actually is. I know there was a journey to a gallery devoted to Picasso and I recall the breakfasts at my hotel – the best of that European odyssey. I remember I had the first taste of sunshine in the Danish capital for many a week and dispensed myself of layers – big mistake in those far northern latitudes. The sunshine was short-lived and I was soon regretting my climatic stupidity. But that is all I can remember of my only venture into Scandinavia.

One and a half decades later I reached out for a salve to a mixed up life and found Merete. She became the first of a collection of pen-friends. She remains in my life to this day. Before my lovely Leigh, she and her letter-writing colleagues kept me going trough troubling times. Once I found my beautiful lady closer to home most of my correspondents dropped off – but not Merete. Eventually she too found a partner for life – but even then did not dispense with me.

Then, at the turn of the millennium, our island and Merete’s homeland became interwoven when a Tassie girl found a Danish prince. On a day perhaps not too distant from this one, a Hobart beauty will become Queen of the Danes, Queen of my Merete. She will charm the world anew.

Around the same time as Danish royalty was meeting a Taroona lass, there came a literary invasion to rival that of Harry Potter. ‘The Girl With the Dragon Tattoo’ intrigued her way into our lives, a precursor to the world’s love affair with ‘Scandi-noir’. Much followed in the acclaimed trilogy’s wake as the books morphed into movies and the Scandinavians started to punch well above their weight in popular culture. On our screens, big and small, as well as in print, those countries just south of the Arctic Circle are giving the world something it cannot get enough of. They say imitation is the highest compliment, but when the rest of us try to emulate their unique product – well, we simply fall well short. We cannot replicate that distinct ‘feel’.Whereas ‘Harry’ largely passed me by, all this snowy, frigid fare has had me hooked too. Out of all its offerings my personal favourites have been ‘Borgen’, ‘The Bridge’ and ‘Lilyhammer’. Can we link those dastardly pillaging and raping ‘The Vikings’ in with all this ‘Scandiness’ too? These lands of ‘the long winter night’ are on to a good thing and long may we be in their thrall as they continue to mesmerise us with it.

So when Jessi Adler Olsen’s ‘The Keeper of Lost Causes’ reared up at my local art house, I trundled off for another dose. The dourness of the lead actor is this film’s hallmark. Wallander’s life history has nothing on this guy. He’s been shot by love and shot by bullet. He manages a whole movie without an upward twitch of the lips – well, maybe perhaps just the merest of hints before the end credits rolled. 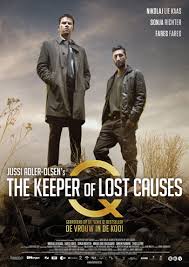 In this there was a touch of ‘The Bridge’ and its glorious pairing of two police sleuths when Ol’ Sad Sack is joined in cold case investigations by Assad, a Muslim (Fares Fares) – one who initially dismally fails to lighten Carl Mørck’s (Nickolaj Lie Kaas) burden, despite his best efforts. I am hoping this film will be the commencement of a franchise – I want to see much more of that miserable bugger Mørck up there on the silver screen.

Pretty soon the unlikely duo, operating more by hunch than evidence, are in a race against time to save the bacon of a feisty dame (Sonia Richter) who’s endures years of incarceration in, of all diabolical prisons, a pressure chamber. The cinematic audience goes along with them on a masterful ride of red herrings and derring do. Gradually the iciness from Mørck towards Assad thaws somewhat as the action component ups the ante. Substitute the frozen urban landscapes for the bayou of ‘True Detective’ and you get the feel of this fine thriller. Its great stuff – but then one now expects this from the these nations fringing the North Sea and Baltic. It is as ‘…superbly gripping…’ as its pre-publicity blurbs laud so, if subtitles do not faze you, ‘The Keeper of Lost Causes’ beats most Hollywood offerings of the same ilk hands down.

Official trailer for the ‘Keeper of Lost Causes’ = https://www.youtube.com/watch?v=_mBi0cRnaVM